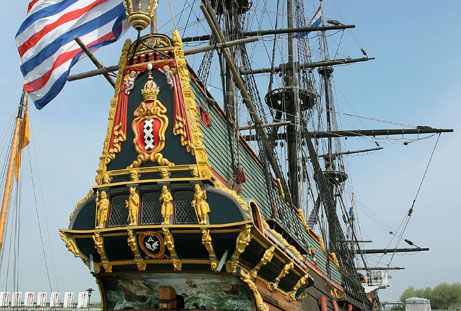 The Batavia is one of the showpieces of Batavialand! Imagine yourself back in the 17th century and step aboard the reconstruction of this beautiful VOC ship. Our guides tell stories about the journey of the Batavia with passion.

On April 7, 1995, Queen Beatrix christened this ship ‘Batavia’, after which it was set up. Since then, the Batavia can be visited every day in Lelystad.

About the Batavia
The original Batavia was built in 1628 on behalf of the Dutch East India Company at the Peperwerf in Amsterdam. It was a return ship, specially designed to take the long trip to and from the Dutch East Indies. However, on June 4, 1629, the ship perished on its first voyage off the coast of Western Australia.

Next to the warf there is the largest outlet mall of the Netherlands: Bataviacity